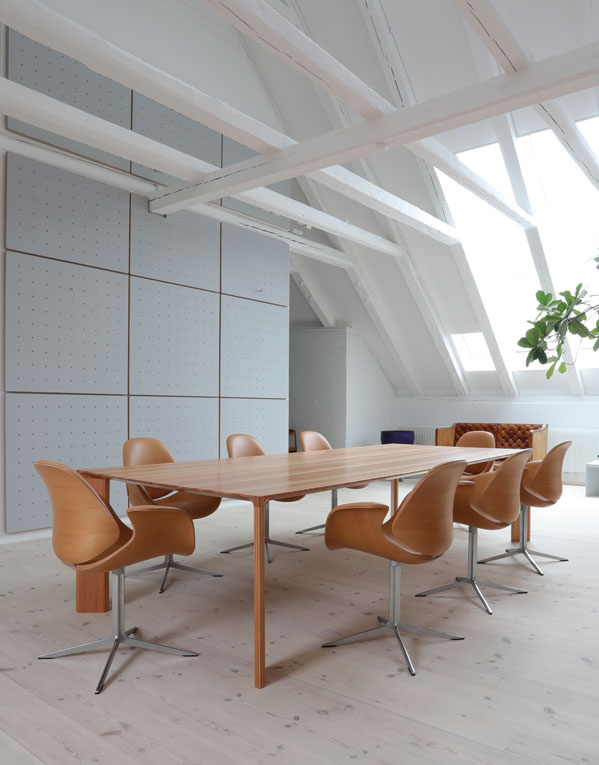 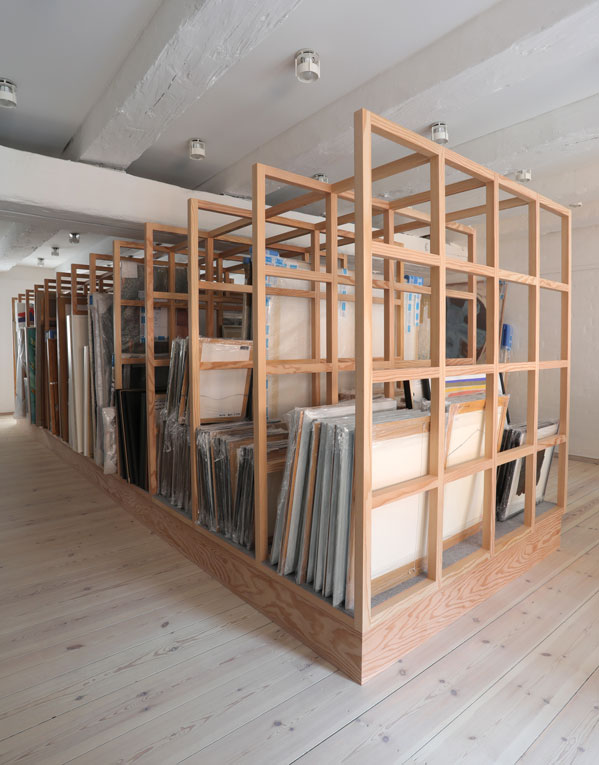 Danish Design on Every Floor

The Brewer’s Yard in Brolæggerstræde, located in the very center of Copenhagen, is a sacred address. This is due to the fact, that it was at this address a young brew master J. C. Jacobsen, at the early age of 24, inherited a small home brewery after his dad’s passing in 1835. After a short period of time the brewery experienced immense success by way of their production of Bavarian beer, a brand-new type of beer in Denmark, that they outgrew the premises. This meant that J.C. Jacobsen established a new brewery at Valby Bakke in 1847, which took the name Carlsberg, after his son Carl.

Today the New Carlsberg Foundation reside at the old brewer’s yard. In collaboration with the designers Kasper Salto and Thomas Sigsgaard we have recently carried out a noteworthy renovation at this site.

Kasper Salto and Thomas Sigsgaard were granted full autonomy to rework the five floors of the former brewery, New Carlsberg. The main idea has been to create and use furniture and interior pieces that can be used both for very specific purposes, as well as those that are more loosely defined.

Constantly keeping this in mind Salto & Sigsgaards decided to carefully analyze which parameters would be best suited to drive the new interior optimally.

The analysis and considerations resulted in a combined design and logistics program that goes by the name of TSD. TSD is an abbreviation of Transit, Storage and Display. The underlying thought was that the outfitting should be closely tied to the house and its functions, and should not exude the vibe of a passive stockroom. The main idea is thus that everything that is stored on the floors of the foundation, be it paintings, graphics, sculptures, crafts, books or other acquisitions, can be continuously displayed in an ever-changing and visible cycle. A sort of shifting exhibition if you will, where some pieces disappear for loan while others return, all the while more stationary functions are also established.

Picture and library shelves have been installed in a grid-type construction such that paintings and books are fully visible, thereby contributing transparency where nothing is hidden. The bookshelves are not shelves in the traditional sense, but rather a grid wall, upon which paintings of varying sizes can be placed, based on need and in variable heights by support of shelves 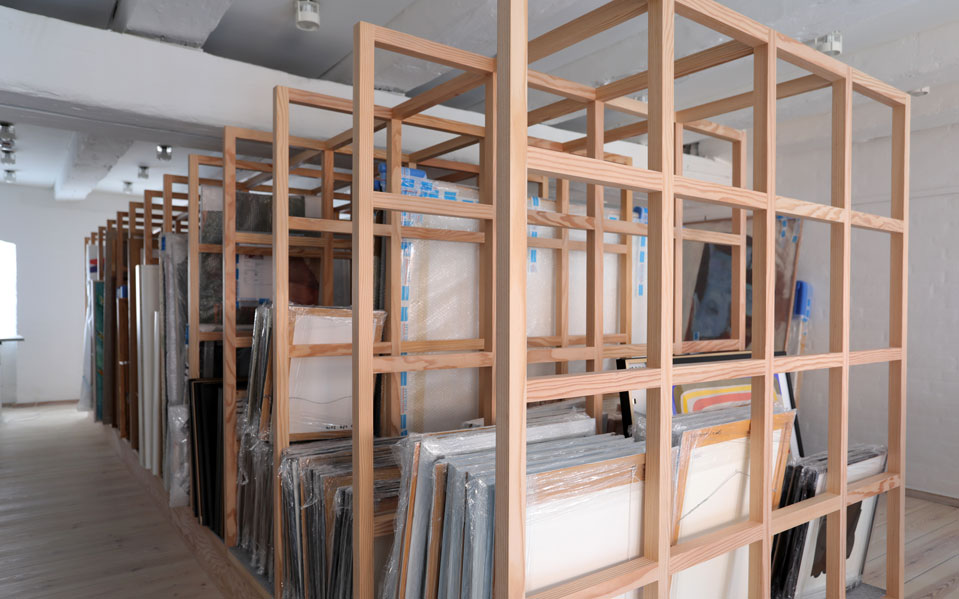 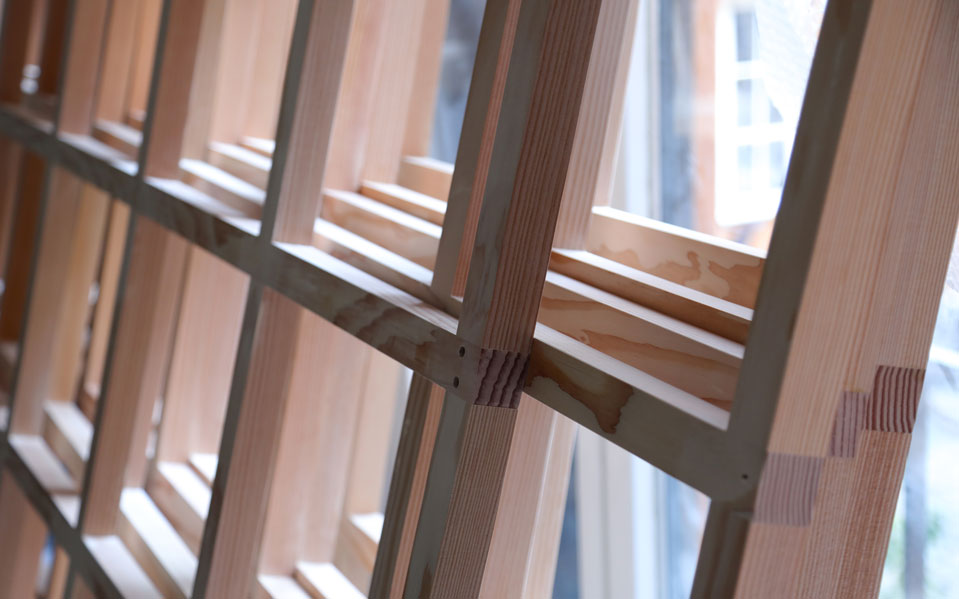 The library itself is not large in area, however, it is dominated by a large sloped ceiling with windows that kips while being turned towards the façade of the yard. This is certainly not the optimal geometric space for shelving. Nevertheless, the challenge was met in elegant fashion by installing the shelving in a 90-degree angle from the façade and the slope of the ceiling, while at the same time retracting the headboards and top parts of the shelves about 10 cm away from wall and ceiling. This was done, in part, to create space between furniture and the surrounding room, but also to compensate for the odd angles of the room. Namely these odd angles in the old house caused problems:

The 3D-boards are executed as square plates with rounded corners of plywood that is coated with light grey linoleum and are mounted with bushings in a module system, on which shelves of different sizes can be attached. Different types of crafts, such as ceramics, metal works, glass art, small sculptures and other artifacts of modest sizes can be placed here. The boards are supplemented by long gallery strips of Oregon Pine without visible fittings can be attached at alternating heights such that paintings and graphics can rest against the walls. 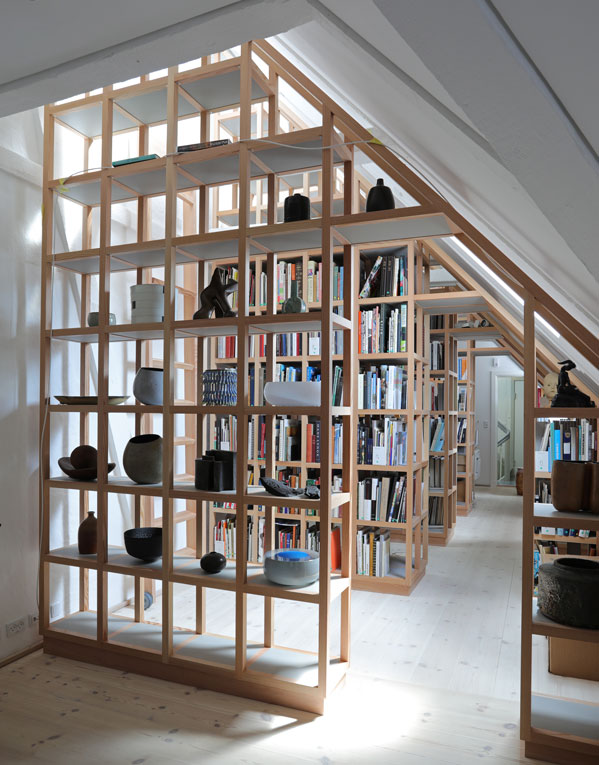 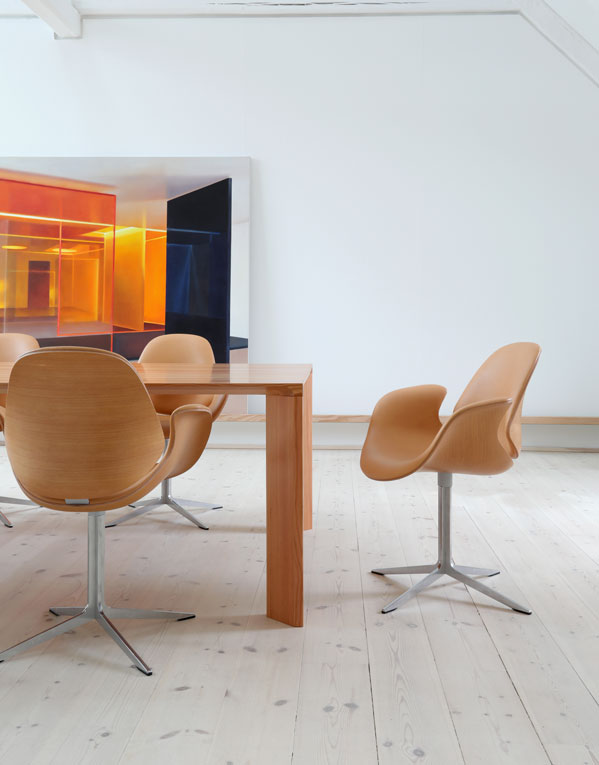 The large conference room table, seating 10 people, is surrounded by Kasper Salto & Thomas Sigsgaard Council Chairs, because a chair with a special story seems suitable for a building with that amount of history,

In 2011 the design duo Kasper Salto & Thomas Sigsgaard won a design competition under the auspices of the Danish Ministry of Culture, to design the furniture for one of the permanent chambers at the United Nations headquarters in New York – The Trusteeship Council Chamber.

The same chamber was designed by Danish Architect Finn Juhl in 1951 as a gift from Denmark to the U.N.

The chair pass on the baton from Finn Juhl’s iconic design heritage in a sculptural and pleasant direction, which merges shape, colour and natural materials.

The table is designed specifically for the renovated conference room and measures 130 x 300 cm, it is made from massive Oregon Pine and offers a couple of interesting details. The legs of the table are carried out as broad planks that are angled 45 degrees with regard to the rectangular shape of the table, this adds a sense of visual lightness despite the large dimensions of the legs. However, most interesting is perhaps the construction of the tabletop. The traditional sarge has been replaced by a fixing system using steel rods. These rods are placed in narrow, milled grooves underneath tabletop. This principle is well-known from the fixing of the fingerboard of an electrical guitar (or a solid Fender-bass), where the strings over time will make the fingerboard curve upwards. In this case the fixing has been applied such that the immersion of the tabletop, that will occur over time, can be adjusted in a simple manner.

Products from this case 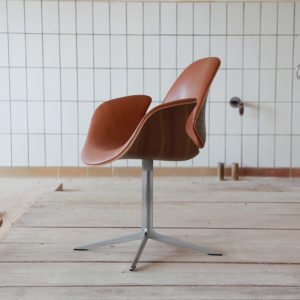